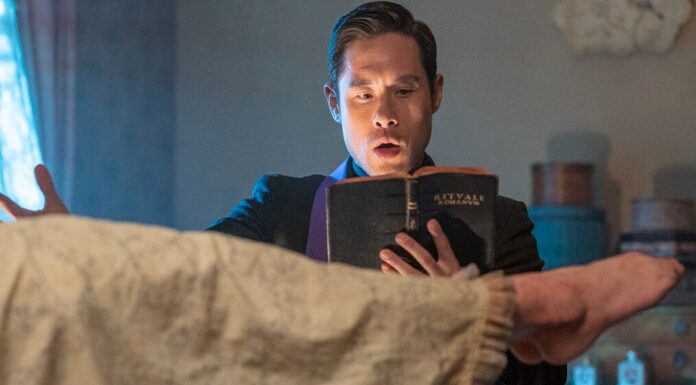 It would appear that Ben (played by Raymond Lee) continues to jump for the foreseeable future. The reboot of the fantasy series Quantum Leap was just recently given a second season order by NBC, and as the story picks back up, Ben finds himself inside the body of a late 1970s security guard working for a budding pop singer. Ben knows that someone is trying to kill her faster than you can say “sounds like The Bodyguard,” and in order for her major concert to go on, he needs to figure out who is trying to kill her first. (tvacute.com) Here is all you need to know about the conclusion of the Quantum Leap Episode 9 Recap, in case you missed any of the exciting moments.

24 April 1979 in Chicago. When Ben landed in Jack Armstrong’s care, a bodyguard in charge of Carly Farmer, a well-known pop singer, he is dazzled by flashing camera lights. As she enters the location, Carly introduces herself to Amanda, the event’s organiser, and inquires about her mother, who was ill. Amanda is surprised by Carly’s consideration. Ben wonders where Addison is as he observes the sound check from the crowd seats. Prior to going into the imaging room, Addison enters and checks in with the group. Ben welcomes Addison to the chairs and tells her about his memories of performing with Janis Calavicci. He still can’t recall what he is defending Addison against. According to Ziggy, Carly passes away while performing.

Carly was in the path of a falling light fixture when Ben rushes to the stage and knocks her to the ground. After readjusting, Ziggy asserts that Carly will be killed that evening. Ian and Jenn are consulted by magic. They both concur that Janis Calavicci needs to respond. Ian displays a list of the locations Ziggy said she would leave after placing the project under lockdown. Jenn chooses Belize City as the last destination. Ben learns from Addison during a VIP party that Carly would be murdered by a knife on Lakeshore Drive at 10:15 p.m. Carly appears scared as she approaches Jack and Ben to speak. Ben decides against alerting her about the threat to her life. Carly exits for some fresh air. To conduct some research, Addison departs. Ben rushes outdoors to see how Carly is doing. Jack/Ben is startled when Carly kisses him. She reveals that the previous week, he appeared to be interested in her. Ben retracts his statement and says that she had a difficult day. Trevor, the manager, is hunting for Jack, Loretta interrupts by letting them know. He is told by Dionne inside that Jamie, Carly’s younger sister, has come and that this is an issue. The women warn Jack/Ben not to tell Carly she’s trying to enter the party since Jamie is a junkie and is a drug addict. Jamie can be found there when Ben walks outside. Ben is informed by Addison when she comes that Jamie was found guilty of killing Carly.

Jamie displays the party invitation she sent to Ben. She feels Carly did it. She assumes that the invitation wasn’t intended for her after he looked it over. If the ticket was intended for her, she inquires. Ben is instructed by Addison to deny it, but he confirms it. She exudes relief and happiness that Carly has granted her forgiveness for the past. She asks Jack/Ben to inform Carly that she loves her and is staying at the Budget Inn if she wants to visit her. Addison is sent back by Ben to learn more about Jamie’s conviction. Carly is being questioned in the background regarding her tour. Ben is present but not participating. Ian assists Addison in researching Jamie’s conviction. When the reporter inquires about Carly’s relationship with Jamie, Carly acknowledges that it has been six years since she last saw her sister and claims that Jamie was more talented than her and used to write all of Carly’s songs. Trevor queries Jack/Ben over Jamie’s appearance. Ben reports that Jamie appears to be in good health and eager to get back in touch with Carly. To speak with him, Trevor yanks him from the space. Ian identifies the weaknesses in Jamie’s prosecution. The warning messages Jamie has written to Carly over the past six years are displayed to Ben by Trevor. Each one is typed. Trevor removes the invitation as Ben pulls it out to see if the same typewriter was used, telling Jack/Ben not to tell Carly Jamie had arrived that evening. When Addison arrives, she informs Ben that since Trevor owns Carly’s inventory, he will stand to gain tens of millions of dollars should she pass away.

In Belize, Jenn finds Janis. The main concern, according to Janis, is why Ben needed her assistance when he already had the team. Ben and Addison discuss the likelihood that Trevor would kill Carly and frame Jamie. They should set a trap, suggests Addison. Ben must inform Carly that her life is in jeopardy. This is related to Ben hiding the threat to Addison. Carly is preparing to leave for a stroll around the lake when Ben spots her. Trevor enters as well and becomes angry that Ben/Jack informs Carly about Jamie. They advise against the sisters meeting. Carly is upset with them both. Carly is persuaded by Ben not to go for the Lakeshore Drive walk. She agrees but demands they go out anyhow. Magic shares her feelings with Addison. She acknowledges her anger. Carly brings Jack to a bar where she is hanging out with her band and crew. She confides in Jack when they are alone that singing was never her thing. She started doing it since Jamie registered them for a talent contest. Ben is informed by Addison that Ziggy has examined the threatening letters and has determined that Trevor is the author. Ben tells Carly that Trevor kept her and Jamie separated all these years and shares that information with her. Angry that she had abandoned her sister because she had bought into Trevor’s lies, Carly storms out of the pub and into the alley.

Ben assures her that she will recover going forward. Ben/Jack and Carly were only barely spared when a car sped through the alley. Carly becomes aware that someone is attempting to murder her. Trevor is confronted by Carly at the motel. He declares his love for her. She dismisses him. After removing Trevor’s access pass, Ben sends him outside. Ben urges Carly to get in touch with Jamie right away and begin the process of reconciliation. Janis and Jenn carry on their conversation. Janis doesn’t have confidence in the QL staff. When she departs, she finds that Jenn had paid her bodyguards to arrest her. Ben/Jack is still sitting up, on guard, and awake when Carly gets up in the morning. He has not slept all night. The door is being knocked on. When Jamie enters, the sisters make up. When Addison comes back, she tells Ben that Carly is still in danger and that she will be fatally stabbed backstage. Instead of at Jamie’s hotel room this time, the knife is discovered in her coat pocket. Ben advises Carly to postpone the show. She won’t keep living in constant terror of this murderer. When they try to attack her, she will defend herself in the hopes that the killer is discovered.

Ben discovers that Trevor isn’t the murderer but that the killer was aware of the letters because they used the same typewriter to send Jamie’s invitation while they were waiting for the show doors to open. When he calls Trevor, Trevor informs him that Loretta, the backup singer, was always envious of Carly and furious that Trevor had been left out of the songwriting credits as the home doors abruptly open. Ben hurries behind the scenes. Carly is waiting for Jack, but Loretta distracts her by telling her that Jamie needs her. Jamie is on the ground while Carly descends the stairs. She turns to find Loretta brandishing a blade. Ben stabs himself while tackling her just in time. Ben is bleeding when Loretta is removed. Paramedics show up. Janis is escorted into the QL headquarters by Jenn. Magic and Ian are waiting to welcome her. Ben/Jack was bandaged backstage but insisted on attending the performance. On stage, Jamie is assuming Loretta’s position. With a duet, they open the performance. Ben is joined backstage by Addison, who informs him that things go well for Jamie, Carly, and Jack. Ben assures Addison that he won’t ever lie to her again. He springs. His leap places him next to a doctor who is helping a patient deliver a baby.