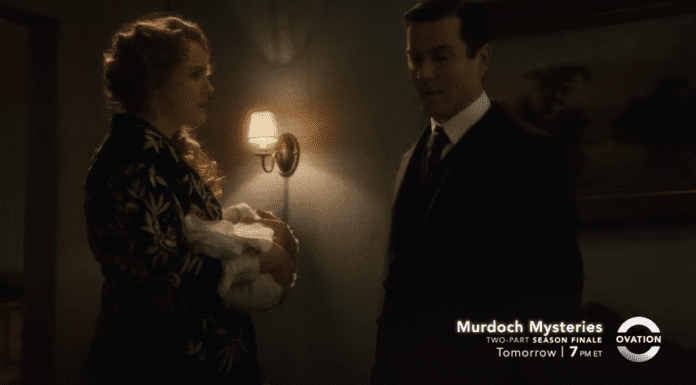 Murdoch Mysteries is a Canadian TV show about a detective who solves mysteries. It started in 2008. The series is based on the Detective Murdoch novels by Maureen Jennings and is set in Toronto at the turn of the 20th century. It’s about a detective at Station House Four named William Murdoch (Yannick Bisson). He solves crimes with scientific methods and inventions that were very advanced for the time. Dr. Julia Ogden (Hélène Joy) and Inspector Thomas Brackenreid are there to help him. Constable George Crabtree is also there to help him.

Close Encounters is the title of episdoe 23. Pay The Piper is the title of episode 24. In the finale we will see,  After a Murdoch doppelganger is killed and a bomb is discovered in their home, Murdoch (Yannick Bisson) goes to great lengths to safeguard Ogden (Helene Joy) and the infant Susannah in the two-part Season 15 conclusion of the historical thriller.

Murdoch Mysteries was officially renewed by CBC television for Season 16 on June 1, 2022, giving a 24-episode season once more. It will be broadcast on CBC in its regular time slot in the fall of 2022.

🚨SEASON 16!!🚨 We’re so excited to officially announce that #MurdochMysteries will return for another epic 24 episodes on @cbc and @cbcgem! Thank you for all of your support #Murdochians. 💗 What are you looking forward to seeing this season? 👀 pic.twitter.com/YwB8My8BVn