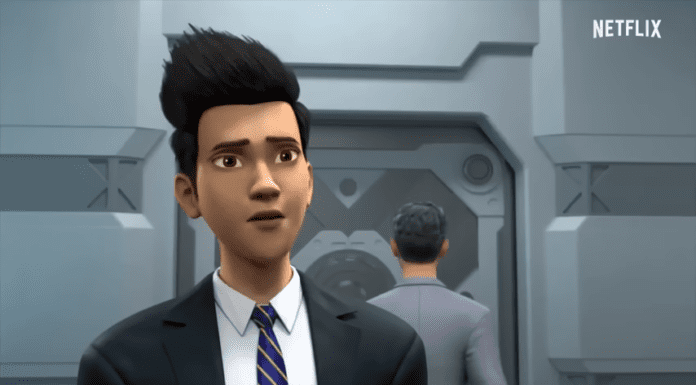 Jurassic World: Camp Cretaceous animated series is the first Jurassic property aimed at kids, and fans are excited to see season five, which premiered only on Netflix. The new season 5 of Camp Cretaceous raises the stakes for campers who are still trying to escape the dinosaur-infested island from season one. When Kenji’s (Ryan Potter) father Kon arrives in the Season 4 finale, the campers’ hope of rescue rises again, but they’re now turned against Mantah Corp and even one of their own. But the rest come together to save themselves and the dinosaurs around them. Can they save the dinosaur and can they go home? Will six pals manage to leave the island at last? Let’s take a look at what happened in the Camp Cretaceous season 5 finale.

Kenji and his father Mr. Kon are reunited at end of the season 4. His father is genuinely delighted to find Kenji alive and well as the season 5 begins. He invites the children to utilize the island’s resources as their own, and he punishes the campers’ ally Dr. Turner, a dino-scientist who was hurt by season four villain Kash. He promises to return the children to their families if they would just hold out for a few days while he works out a financial arrangement with BioSyn to keep Mantah Corp and the island operating. Additionally, he grants Kenji the chance to participate in his life, realizing Kenji’s desire for a close bond with his father. it sets Kenji for loyalties because Kenji has always yearned for his father’s attention and love. Daniel Kon, Kenji’s father, is the CEO of Mantah Corp, a major antagonist for the kids throughout the series.

However, Kon’s true face quickly emerges. He continually isolates Kenji from his buddies by manipulating his desire to assist. He pretends to be the victim and says he doesn’t know why the campers don’t believe him.

In the second episode of finale season 5, Kenji’s first date with Brooklyn doesn’t go down well because Brooklyn wants to gather evidence with Darius and Ben to show him the real face of his father – being a supervillain. Kon’s three guests come to the Island.  Mr. Kon uses Kash and Dr. Turner’s research to perfect dinosaur mind-control and the campers sabotage Kon’s business meeting by short-circuiting the mind-control chips. He convinces Kenji, but his companions aren’t persuaded. The refusal of the group to give Kon a chance causes a rift between Kenji and his pals. Darius’s brother Brand asks for assistance in rescuing the children at the end of episode two. The camp counselors Roxie and Dave promised to save the children when they were ejected from the island at the conclusion of season one. The three search for the campers on Isla Nublar.

In the third episode of finale season 5, Mr. Kon is busy showing his guests his presentation. On the other hand, Kanji’s friends come up with a new plan so that the proposals don’t come to fruition. By the end of the third episode, Kash falls prey to Dinosaur. And Kanji gets angry with his friends. .Mr. Kon’s guests leave, except one guest who provides an offer to him.

In episode 6, When Kon kidnaps the campers and transports Kenji and his mercenary goons to Isla Nublar, including villain Hawke (which we saw him in season three), Kenji begins to suspect that his father is actually involved in questionable activities. Mantah Corp is not only an accomplice in BioSyn’s desire to exploit dinosaurs but also a willing pawn in the scheme.

Despite Kenji’s protests, Kon captures Bumpy and uses a mind-control chip on the Ankylosaurus, which is when Kenji reaches his breaking point. After being finally prodded into action, Kenji aids Dr. Turner in escaping from his father’s influence on Isla Nublar and then returns to Mantah Corp island determined to right his wrongs. While contemplating their feelings after Kenji’s betrayal, the other campers escape their jail and try to ensure Kon can never again mind control dinosaurs. The campers’ and Kenji’s sadness over forsaking the ones he loves, as well as the emotional struggle that feels real, propels the story’s emotional core to a satisfying conclusion.

the campers recreate the peaceful gathering place where dinosaurs formerly congregated on Isla Nublar in order to unite and defend the dinosaurs against Mr. Kon’s impending return. The resultant utopia serves as the arena for the decisive confrontation between the campers and Kon’s henchmen. As a result, there is a battle involving a Kentrosaurus, a Baryonyx, two T. rexes, a Spinosaurus, the Toro, as well as other creatures that regularly switch between targets and become allies as the battleground moves. It is heartbreaking when Big Eatie is hurt at the end of the penultimate episode and the campers believe she has been dead.

The youngsters are going through an important and emotional time as the last episode begins. Mr. Kon is willing to kill a T. rex in which he has made a significant financial investment. Although Big Eatie’s injury appears serious, Kon isn’t willing to lose that investment after all. the best reunion of the season has to be between Ben and Bumpy. Kenji’s life changes when Mr. Kon chooses to capture Bumpy despite Kenji’s pleas for him to leave the Ankylosaurus alone. And Kenji tells Ben to use the mind-control device to get Bumpy away from the bad men when he tries to assist Ben in rescuing Bumpy. Roxie, Dave, and Brand meet Dr. Turner (who has escaped Kon’s control).

The group of pals notices that the dinosaurs are frightened Mr. Kon, in the meantime, instructs his men to go collect the facility’s secret password from the kids. Early indications also point to the demise of “Big Eatie,” the T-Rex. Mr. Kon modifies the island’s climate in an effort to entice the group of friends to visit. The children move underground, constantly evading danger and frantically making their way to the boat in an effort to eventually escape this horror. 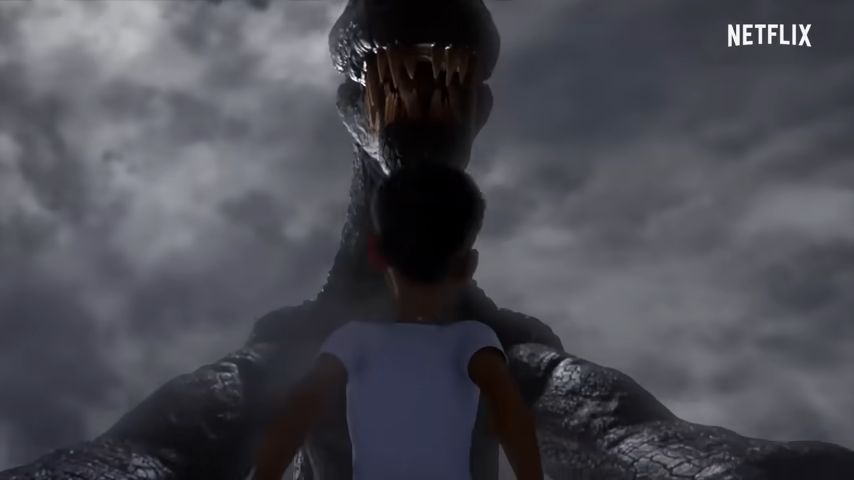 Brooklyn almost gets injured by a dinosaur, but Kenji saves the day. While evading one of Mr. Kon’s men and fighting off a Raptor, Yaz and Ben struggle as well. Mr. Kon commands one of the dinosaurs to attack Darius as the show nears its conclusion, but Kenji stands in the way. Kenji proposes to reveal the password to his father in exchange for Darius’s survival. He divulges the passphrase. In spite of this, Mr. Kon attacks Darius with a dinosaur because he ” he didn’t want to leave any evidence..” Fortunately for Darius, “Big Eatie” comes and attacks the other dinosaurs. luckily, “Big Eatie” is still alive!

The island core suddenly begins to overflow. The core of the island suddenly begins to overflow. All areas of the island are gradually becoming dangerous.kenji ‘s father decides to leave the island. he wants to take Kenji with him. but Kenji refuses to go with him.  he reminds him that their friends are still on the island. And his friends are his true family. Kenji is left with his “true friend”. His father boards the plane and takes off. In the end, it turned out that everything was a hoax. It was all a conspiracy by Kenji and his friend to save the dinosaur. Kenji’s father was concerned by the facility’s “severe overload” which prompted him to leave. The dinos won’t be in danger.

The island is then visited by boat. Roxie, Dave, and Darius’ brother Brand are in that boat. When Darius sees his brother, it’s a touching reunion. Brand confirms to Darius that his late father will be pleased with him. Finally, all depart from the island. Brooklyn and Kenji kiss, bringing this romance to a beautiful conclusion. Kenji’s father is taken into custody. The “Nublar Six” and their ability to survive on the island have been discussed in the media. When they return to the mainland, they find and reunite their relatives. But Kenji is alone. Darius hugs his mother and Kenji joins them.

An old Darius is responding to comments on social media as the episode comes to a close. Kenji lives with Darius. with Sammy Gutierrez and Yasmina “Yaz” Fadoula. They can be seen together on a group video call as they browse at colleges at Sammy’s family’s ranch in Texas. As Dr. Turner’s assistant, Ben is celebrating a holiday with Bumpy on the hidden island. In addition, Brooklynn is following a lead. She has put her days as an Internet celebrity behind to pursue a career as a journalist and she is currently looking into Lockwood Manor, which is not too far from Darius’ home.  Darius and Kenji video call with their friends. The end of the episode draws near. Darius hears some thunder and then sees a dinosaur outside his window. The credits start rolling as soon as he smiles. It appears that Camp Cretaceous is still in operation but has not been fully operated. It also appears that the original six assist in its operation.

The Romance Between Sammy and Yaz

Season 5 also demonstrates the joy Sammy and Yaz experience while planning the ideal occasion for Brooklynn and Kenji. When everything comes together, the pair offers to assist before giggling at the scene. While Yaz began the series as a reclusive individual who would never let anybody get close to her, by season four. The possibility of these closest friends developing a romantic relationship has been hinted at throughout the series from the start of their friendship. At the end of the finale, The parents of Yaz and Sammy are quick to express their happiness that their daughters are dating.