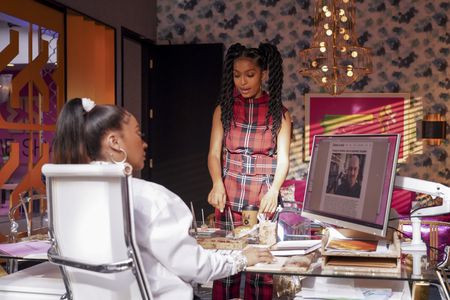 In the ongoing Black Lives Matter episode in Grownish Season 4, Nomi talks about racism. Everyone feels bad about the way she talks, but later accepts her mistake and apologizes. Meanwhile, Javi (Henri Esteve) and Ana’s breakup will end the relationship in such a strange way, who would have thought. After a two-part Black Lives Matter plotline, Zoey’s (Yara Shahidi) way is about to get more challenging. She focuses on her career. We know she is in the middle of an internship. He still has a lot to learn. She believes what she is doing is right. And she will raise her voice, regardless of whether her internship may be in jeopardy. To get to know the new episode 7  titled “A Peace of Light” more closely, you can see its sneak peek, photos and synopsis with www.tvacute.com. plus read Grown-ish Episode 406 recap below.

grown-ish Season 407 Synopsis: When Zoey’s ideas are used by her boss without crediting her, she debates whether to speak up and risk her internship, or sit silently; Jazz seeks medical leave from the track team by going to therapy; Aaron tries to make a good impression.

Grown-Ish Season 4 Episode 7 will release on Thursday, August 19 at 8 PM. on freeform. Grown-ish airs in Canada on ABC Spark, in select international territories, the series will be available on Disney+ as an original series under the dedicated streaming hub Star.

Zoey protests with Jazz, Nomi, Ana, Luka, Kiki, and Javi. That’s when the police announced that a curfew would go into effect in Los Angeles. Aaron, Doug (Diggy Simmons), Luca, and their younger sister Kiki decide to leave town to protest. While the rest go back home. Meanwhile, Jazz (Chloe Bailey) talks about the racist coming out of Zoey and Nomi’s mouths. Even though Nomi (Emily Arlook ) is not abusing, her language is based on racism. She engages her mother in discussing this and she finally apologizes. The trio embrace and they realize that with true sincerity, friendship is possible. Meanwhile, Javi and Ana’s breakup will end the relationship in such a strange way, who would have thought. When Javi saw two officers waiting in line in a food truck and thanked them for their service. Ana (Francia Raisa) was feeling embarrassed about this. The argument between the two increases so much that both of them break up.