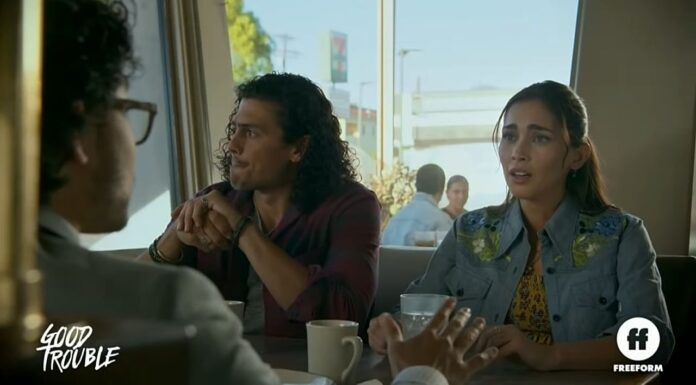 Freeform’s fan-favorite series Good Trouble Season 4 Episode 15 will air on Thursday, August 11 at 10 p.m. and will be available on Hulu the following day.

Mariana and Joaquin are developing a close relationship. They first clashed, and it appeared that they might quit speaking, but they patched things up. Mariana wants to assist Joaquin in resolving his issues with Jenna, his sister. Gael is confronted by Isabella (Priscilla Quintana), who overheard that he bought her a loft so she wouldn’t leave. Gael told her he loved her.  What will happen next? For Malika and Angelica, things have been difficult. After Malika attended a work party, they got into a contentious argument.  Take a look at the synopsis and promo of episode 15 of Good Trouble Season 4 with www.tvacute.com.

Good Trouble Season 4 Episode 17 [Penultimate Episode] Davia meets up with a new person for a date.

The official title of this new episode 15 of Good Trouble Season 4  is “You Know You Better Watch Out.” In this episode,  Davia motivates her homeschooling family to participate in treatment sessions. Isabella’s history is revealed by her parents in this chapter. The complete Good Trouble season 4 episode 15 promo and summary are provided below, along with further details on what to expect.

Good Trouble Episode 4.15 Synopsis:  After talking things through with Evan, Mariana reconsiders her situation-ship with Joaquin. Dennis has a change of heart about parenthood. Davia inspires her homeschool family to seek therapy. Isabella’s parents bring her history to light.

Mariana and Joaquin are developing a close relationship. They first clashed, and it appeared that they might quit speaking, but they patched things up. Mariana wants to assist Joaquin in resolving his issues with Jenna, his sister. He was irritable and insisted that it is his problem, not hers when she went to his loft to suggest that she might have a solution. Later, Joaquin expressed regret and acknowledged that he would not have discovered his sister if it weren’t for her. He has only been concerned about Jenna and the potential threat to her safety. Mariana informs him that there might be a way for him to still see Jenna without going against the court’s ruling. Kelly asserts that she had priority access to him. It’s odd that Kelly believed she had a chance with Joaquin considering how obvious it is that he has no interest in her. Kelly is ignored by Mariana because she finds her odd.

Gael is confronted by Isabella (Priscilla Quintana), who overheard that he bought her a loft so she wouldn’t leave. Gael told her he loved her.  She also questioned Gael’s decision not to disclose their relationship to his parents. Gael makes the decision to go ahead and inform his family about his relationship with Isabella. His mother is ecstatic, and the rest of the family joins in the celebration. Although everything appeared to be going well, this impression quickly faded. The baby’s father has been calling Isabella about placing the child for adoption, but she has been ignoring him. Gael received a call from her father as well, but he blocked the number and declined to answer. If she didn’t proceed with the adoption, Isabella’s father threatened her and claimed he would report her to the police for wrecking his car. He decided to go ahead and call the cops after she kept ignoring his calls. The episode ends with Isabella being led in handcuffs from The Coterie.

For Malika and Angelica, things have been difficult. After Malika attended a work party, they got into a contentious argument. She took actions that she knew would enrage Angelica because her supervisor was trying to separate them. Her strategy worked. Malika and Angelica got into a fight when Malika experienced extreme jealousy. Before going to a wedding, the couple made up, but things immediately soured. The relationship deteriorated after Malika confessed her feelings to Angelica. Angelica claimed that although she equally adored Malika, she was unable to share her. She said that caring for Malika was hurting her. She doesn’t want to be in a polyamorous relationship.