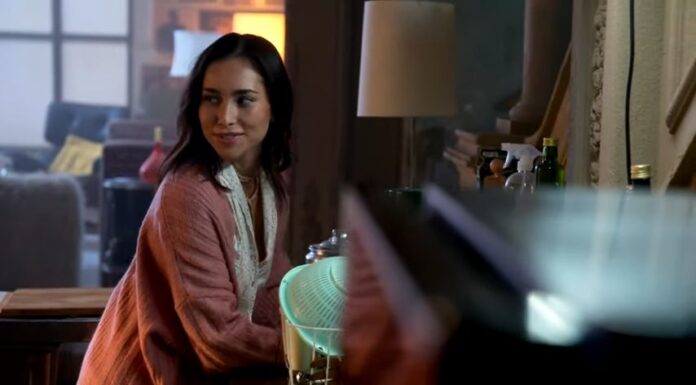 Freeform’s fan-favorite series Good Trouble for the first half of Season 4 is back! It appears like things are becoming more complicated for each and every member of our Coterie family. “Good Trouble” follows the occupants of The Coterie in Downtown Los Angeles as they manage job, love, and the growing pains of being a 20-something at a time when your friends are your family.  If you need a reminder, Season 3 of Good Trouble ended on a number of cliffhangers for many viewers. Mariana and her coding buddies have already been betrayed by Evan, and now their invention has been stolen. Then, after a major case, Callie began to rethink her job choices, Davia was left to choose between Dennis and Matt, and Gael and Isabella grew closer as they battled with co-parenting their impending child. Take have a look at the synopsis, promo, and photos of the finale episode 19 of Good Trouble with www.tvacute.com.

Good Trouble Episode 4.01 Synopsis: The Coterie Crew deals with the fallout of the Season 3 finale. Tommy Sung’s trial comes to a close, and Callie needs to keep Kathleen from legal trouble. Malika processes Isaac’s surprise return. Gael tries to keep Isabella in town. With the approval of the Fight Club Girls, Mariana meets with Evan. Alice is on the road, leaving Sumi as acting manager. Someone new moves into the Coterie.

Priscilla Quintana, who plays Isabella, a resident of the Coterie and mother to Gael’s unborn baby, has been upped to a series regular, along with newcomer Bryan Craig. Craig will play Joaquin, an independent investigative journalist with a mysterious background. Also joining the Coterie crew in a recurring role is Booboo Stewart (“The Twilight Saga,” “X-Men: Days of Future Past”). Stewart plays Luca, an unhoused man Joaquin is doing a story on and befriends.

Isabeall did not have a miscarriage. Dennis dialed Gael’s number, and he was waiting for Isabella. Tommy acknowledges that he was in a relationship with Zach, and his father becomes enraged when he hears him say it out, almost physically assaulting him. The greatest solution, according to Katheleen, is to put Tommy on the stand. Tommy inquires about Callie’s thoughts, and she says it would be beneficial, so he agrees. Kathleen’s former partner informs her that he has made a deal with the feds and that she only has 48 hours to make a decision. Kathleen’s father promises her that if he doesn’t put Tommy on the stand, he’ll tell her where Albert’s wife is, and the Feds would leave her alone. Mariana tells Callie about her feelings about Gael and how she believes Callie is still preoccupied with Jamie. Dennis obtains all of his truck permits and documentation. When Davia tells him how proud she is of him, he informs her that she is the reason she is still there.

The comics receive a leaked email from HR indicating that Alice will win the money and competition since it appears to be a good fit with the increased focus on Asians and Margaret Cho presenting and directing. Lucia Morales, Angelica’s ex and a municipal councilwoman, offers Malika a job in her office after being pleased by Malika’s campaign. The present bosses of Dyonte and Malika have misgivings about it. Katheleen initially decides not to call any more witnesses, but then changes her mind and invites Tommy to the stand, despite the fact that it will be painful for her. She instructs Callie to interrogate him. Despite the possibility of being fired, the ADA instructs Jamie to interrogate Tommy in order to agitate Callie. Jamie refuses.

Tommy address the jury directly. Mariana meets with Jackie after receiving a wonderful recommendation from Evan, and she persuades her to join Revitalization Beauty. Jackie points out that the parallels are just accidental. The comedy venue at the Palace beneath the Coterie is hosted by Alice and Margaret Cho. Mariana: I was hired. Let us now set fire to Revilize Beauty. Mariana got the job, and it’s all part of a bigger scheme with her Bulk Beauty pals, who have forgiven her. The show is a success. Davia is undecided about who she should select. Gael assures Isabella that he is completely committed to her and does not want her to leave. Gael and Callie break up, and they break up with each other. Sumi is told by Alice that they should simply be friends. After Dyonte has left, Isaac appears. When Evan sent the text, Jackie was with him. Jackie is aware of Evan’s existence. Wilson, Callie imagines, is questioning her on the stand, asking why she’s here and why she’s gone so far from her dreams. He inquires as to why she is going.