Ghosts Season 1 Episode 18 [Season Finale] The Cursed B&B Opening: Will they be able to successfully? 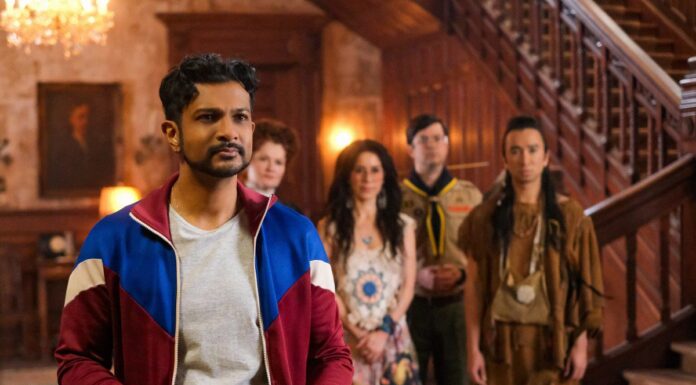 CBS drama Ghosts Season 1 Episode 18 will release on April 21, 2022. The big day has finally come for Ghosts’ lives: Sam and Jay are welcoming their first guests to their B&B. The haunting B&B faces a Norse curse in the season finale.

In ghosts episode 17,  introduced a new ghost to the mansion, Stephanie (Odessa A’Zion), she’s a young spirit who spends most of her time sleeping. Stephanie and her boyfriend Tad were making out in a car on prom night in the 1980s when they were targeted by a chainsaw killer who had escaped from a local asylum. Tad seemed to have survived the attack, but Stephanie didn’t. The penultimate episode was fantastic, demonstrating that the mansion is large enough to contain many hidden spirits. (Read the Recap below)   Fans are now eager to discover more about the new episode of Ghosts (2021). At www.tvacute.com, you’ve come to the perfect place to get the Ghosts Season 1 Episode 18 synopsis and trailer.

The first season of this hilarious smash comedy comprises 18 episodes. It closes with Sam (Rose McIver) and Jay (Utkarsh Ambudkar) still on the verge of establishing the B&B in their haunting inherited home. The Season finale episode 18 titled is “Farnsby & B.” In this season finale, Sam and Jay will welcome their first B&B guests. Unfortunately for the newlyweds, the long-awaited occasion is beset by setbacks, with Viking ghost Thorfinn (Devan Chandler Long) possibly to blame after revealing that he used a Norse curse to prevent the B&B from becoming a reality. Their snobby neighbors (sitcom veterans Mark-Linn Baker and Kathryn Greenwood) threaten to overshadow the couple with their own inn. While Revolutionary War spirit Isaac (Brandon Scott Jones) suffers his own identity dilemma as he prepares to open his heart to Redcoat ghost Nigel (John Hartman), the only means to reverse the curse could place Sam in an existential bind.

Ghosts (2021) Episode 18 Synopsis:  – As Sam and Jay await the arrival of their first official bed-and-breakfast guests, they face obstacles triggered by a Norse curse placed upon them by Thorfinn; Isaac takes a huge, centuries-in-the-making step in his personal life.

New Series Ghosts Episode 18 will air on April 21. “Ghosts” premieres on CBS on Thursday. Each episode will premiere on Paramount+ on Thursday nights at 9 p.m. ET/8 p.m. CT, (at 8 pm on NewsChannel5.) the same day it airs on CBS. The CBS All Access app has been renamed Paramount+, and you can now watch new episodes of “Ghosts” with Live TV the day after they premiere on Hulu.

A new ghost to the mansion, Stephanie (Odessa A’Zion), she’s a young spirit who spends most of her time sleeping. Stephanie and her boyfriend Tad were making out in a car on prom night in the 1980s when they were targeted by a chainsaw killer who had escaped from a local asylum. Tad seemed to have survived the attack, but Stephanie, who was doomed to spend the rest of eternity in her Madonna-Esque gown and enormous. Stephanie, on the other hand, is not like the other spirits. Samantha is a threat and a rival to her, hence she’s a harsh girl. She establishes that it is a non-party living when she chooses to give a ghost prom to celebrate the prom she never got to attend. This irritates Sam, who suffers from prom PTSD since her adolescent years. She apparently thought she had a French friend who was going to fly to America to take her to prom, but it was revealed on prom night that her gorgeous lover was actually one of the bad girls at school who was pulling a joke on her. Pete overheard the story and told Stephanie in the hopes of getting Sam to attend the phantom prom. Stephanie, on the other hand, took advantage of the situation by persuading the other ghosts to assist her in pranking Samantha by purchasing a dozen baguettes. Stephanie attempted to excuse her actions by claiming Sam was too controlling of the ghosts and made too many demands, while Alberta defended their live relationship. After being the only one who could effectively interact with Alexa. she realized how bothersome all of the ghost’s requests were. When the ghosts ultimately apologized to Sam for their acts, she once again demonstrated that she is the larger person. Instead of punishing Stephanie by forcing her to attend another prom alone, Sam and the ghosts threw her an incredible celebration. Sam always puts everyone else first, Jay took a moment to think about her. He answered the door, handed her a grocery corsage, and gave her the big prom moment she’d always desired, replete with “Kiss Me” playing in the background. Trevor snubbed Stephanie’s approaches. Alberta and Pete grooving, as well as Thor asking Flower to dance, were both wonderful.

Share
Facebook
Twitter
Pinterest
WhatsApp
ReddIt
Previous article
Young Sheldon Season 5 Episode 19 – Mandy is Pregnant. What will happen next for Georgie after this unexpected twist?
Next article
Get ready for Tonight! Call Me Kat Season 2 Episode 16 – “Call Me What the Kat Dragged In”