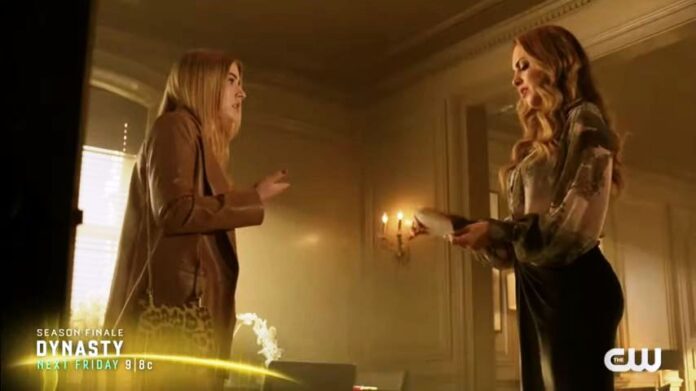 The first hour lacked intensity, but it served as a build-up to the genuinely dramatic second hour, which has completely turned the Dynasty series on its head. When the Carringtons had to go forward to get rid of the evidence, tensions rose. Meanwhile, Fallon (Elizabeth Gillies) and Liam take a break after their breakup, but someone tries to derail their plans. In other news, Before Blake’s discussion, a trip to Los Angeles to avert the disturbing revealed a serious flaw in his coalition. The first hour was terrible, but the second hour managed to pique my interest in the climax. When Eva ( Kara Royster) has been manipulating both Fallon and Liam. She tells Fallon, Liam was seeking lawyers for divorce. and there’s no telling what she’ll do next. Next week, Are you ready for its major ending! “Filled With Manipulations and Deceptions” is the title of the last episode of this season, and from the title itself, you can guess how interesting the season finale of Dynasty is going to be. can’t wait to see what happens in the grand final episode. www.tvacute.com brings you a promo of Dynasty Season 4 Episode 22

In addition, there will be Blake’s political campaign, with its inevitable minefields. And then think about Fallon’s and Liam’s marriage. Then there’s Alexis, who’s plotting something big. Although no Carrington marriage has ever been perfect, we believed Fallon and Liam were committed to each other for the long haul. After a little over a year.  Dynasty has already lost one character this season, and we wouldn’t be surprised if they lost another! Season 5 has been renewed as the conclusion approaches! It’s reassuring to know that this show’s future is secure. Instead, you might speculate what will happen to each character. watch the promo and read the synopsis below.

Dynasty Season 4 Finale Episodes 22 will release on Friday, October 1 from 9:00-11:00 p.m. ET on The CW.  You can also watch it on the official website of The CW as well as a live stream on Direct tv, Amazon Prime, and FuboTV. Dynasty Season 4 has a total of 22 episodes.

According to whats-on-netflix, Dynasty season 4 will premiere on Netflix in the United States in mid-October 2021, as part of the October 2021 schedule, with Dynasty season 4 set to premiere in its entirety on October 22nd, 2021. If you live outside of the United States, new seasons of Dynasty are available as Netflix Originals. Netflix Australia, Netflix United Kingdom, Netflix Canada, as well as the rest of Europe, Latin America, and Asia, are all included.

After the scuffle with Liam, Fallon is unsure of herself. She plans a trip to aid her father. Visiting Sam in Los Angeles, she and Kirby discuss owning another bar. Sam is still enraged at the Carringtons’ betrayal and wants them to apologize and mend fences. Sam admits the new hotel may not be a good business move. Blake’s argument left him on the outs with everyone, but Cristal had a strategy to win the situation. Eva continued to drive Liam and Fallon apart until Colin and Fallon had sex in the office. This was a one-time thing, Fallon informs Colin. He goes, and Eva keeps quiet.

Fallon meets with Liam to find out he doesn’t want a divorce. So they go on a couple’s retreat. Things are going well, but they wonder if they should stay together. Fallon admits to infidelity, and Liam tells her their marriage is ended. Jeff spiraling after not taking his medication, and Dom returns home to find him insane. Alexis gets her 20 from Dom, but it’s revealed that she and her husband are working together. Kirby reveals information to Culhane Carrington but then suggests they destroy the book. Kirby agrees, but we realize she has a backup copy in a printer. Yes, they seem to be playing each other. So, Blake tells the media that Sam is part of the family.