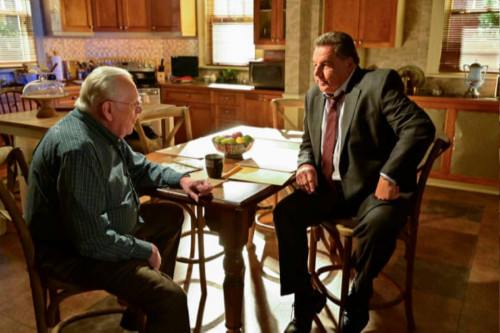 The mayor dismissed an increase in violence following a high-profile shooting in previous  Episode 1 of Blue Bloods. As a result, crime rates continued to rise, and Frank’s work was cut out for him. Meanwhile, Erin was working on a cold case that caused her to be estranged from her family. Fans are excited to see what episode 2 has in store after viewing this episode. You can receive images from the release date as well as a spoiler at www.tvacute.com.

Blue Bloods Episode 1201 Synopsis: titled “Times Like These” – Tension escalates between Frank and Mayor Chase (Dylan Walsh) after Frank makes a public arrest that goes viral. Also, Danny and Baez investigate a gang attack that takes an unexpected turn; Jamie worries when Eddie lies to him about where she’s going in the evenings; and Anthony secretly recruits the Reagans for help with a surprise for Erin,

Blue Bloods S12E2 will release on 8th October 2021 at 10 p.m. ET on CBS, Weekly releases on Fridays with an average runtime of 42-44 minutes. If you have a cable subscription, you may watch ‘Blue Bloods’ season 12 Episode 2 on CBS at the hour stated. The new episodes will be available on the CBS official website as well as Paramount+ after their release. Subscribers to DirecTV, FuboTV, and YouTube TV can watch the episode live. Post-release, the episode should be available on VOD providers like Amazon Prime Video, Vudu, Google Play, and iTunes. A Hulu subscription also gives you access to the first nine seasons of the show.

Season 12 Episode 1 of Blue Bloods continued to look at how the political atmosphere affects cops. When a wave of violent crime hits, Mayor Chase objects to Frank calling it what it is: an epidemic of felons unlawfully having guns. When New York is dealing with the aftermath of the COVID outbreak, he believes this will drive tourists away. Frank tries to persuade him that giving tourists the illusion of safety is insufficient; the city must be made safe. Chase, on the other hand, isn’t having it and sees Frank as interfering with his objectives.

Meanwhile, a young Black man accuses Witten and Eddie of harassment and slaps him in the back when they are detaining a man who goes insane and tries to demolish a convenience shop because he can’t afford cigarettes. She is suspended pending an inquiry on whether she threatened an unarmed citizen as she draws her gun before Eddie captures the man. Eddie visits Witten, who claims to be well but also says that she’s had enough of the anti-cop sentiment and is considering leaving the force. Finally, Danny enlists Maggie’s help in solving the murder of a five-year-old kid, while Erin becomes trapped in a tangled web when she reopens the murder case that Kim observed when she was thirteen.