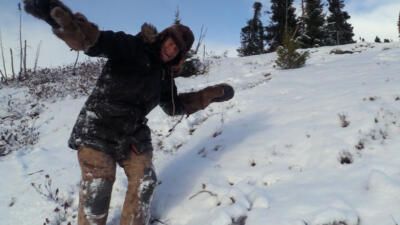 For those who are unaware, Alone is one of television’s most taxing reality programs. Every season, wilderness experts battle to survive in various hostile environments, and this year, the constant presence in Labrador, Canada made for one of the most difficult and perilous tasks on the program. Having only ten objects including for survival. Each week, candidates go through fast interviews and medical exams to make sure they are fit enough to continue. The participant who lasts the longest gets $500,000. Alone season 9 episode 10 begins with three survivors. Teimojin Tim, 31, Canada, Karie Lee, 57 and Juan Pablo, age 30. They are overcoming freezing temperatures, starvation, and isolation. The good news, no one taps out in this episode. at the conclusion of “Winter’s Grasp,” all three of the survivors are still alive. Who is the winner of Alone season 9? We will get the answer very soon. Because we are very close to the finale. Till then read the recap below.

The ground is covered with frost. Teimojin’s shelter looks enormous from the outside, but it’s small and functional from the inside. he needs more moss to insulate against the cold. Teimojin kills a squirrel with his rungu, which he used for rungus in Kenya’s Masali.As the first doctor in the competition, he knows the effects of constipation. He’s had trouble pooping and worries about hemorrhoids, but he knows how to treat them. While collecting boughs, he stumbles badly. He’s weaker, but he can still compete. A distant grouse catches his eye, but he can’t shoot it. Back at his shelter,he realises that gathering took all his energy for the day. Reindeer moss, grouse, and berries are all he has for the winter. He’s saved it for Thanksgiving.

Teimojin learned to flourish in this weather in the military. The weather has made everything more complicated, but he’s glad his roof is still up. He’s famished and boils carb-rich reindeer moss. He’ll utilise moss water to freeze his home, creating a moss ice castle. He expects to improve after Alone. He checks snares slowly since he’s tired and he confesses he’s clinically declining. After a snowfall, he returns to his bear hang to catch his last grouse. He needs a morale and energy boost. He’ll hope for a deeper relationship with his mom. He says she’ll never be alone and he’ll become a better son. At last, he decides how much food he has in the grouse and reindeer moss stew.

We meet Karie Lee, 57, in the snow. She celebrates winter by making a snow angel. She begins constructing a cob oven that will heat the shelter. She is eager to spend more time connecting spiritually with the soil. She is building a chimney for her new oven, which is taking longer to build. She checks the oven after it is finished and hears the clay sizzling. The oven’s falling apart and she’s now spending more time on this and not getting food and is disappointed in wasting that much time on the project. Snowfall has increased. Although there aren’t any bear footprints in the snow, Karie believes a bear may have made a noise outside her shelter. She has a surprisingly high level of energy thanks to the berries., and it’s enough to win Alone. she examines her traps but hasn’t spotted a bear. Her first traps fail, and she has trouble finding more.

She is knee-deep in snow. she used her ribbons to mark the traps. Without food, Karie feels ashamed and goes back home. She decides to give up squirrel catching and eat just berries and fruit leather instead. She hates leaving her refuge to urinate and get water. The wind and snow make it difficult for her to move around. Her hope wanes. Karie is to gather firewood, but the snow’s really deep. She falls while bringing in her wood. She can’t get her feet through her freezing pants. She chuckles as she struggles into her jeans before gathering firewood. Karie hears a squirrel as she throws and shoots. she eats it at dinner. it’s a success. She’s proud of herself.

As Juan Pablo, age 30, is snuggled inside his sleeping bag, it is snowing outside. He needs to conserve his energy because he is undertaking a twenty day fast. As long as people keep hydrated, he claimed, someone may live for one to two months without eating. Juan goes outside into the snowy conditions and calls it ideal hypothermia. He reinforces his tarp after obtaining water.  Juan watches the snow fall through his gaiters-turned-window. He heads to his pier to fetch water despite the bad weather. Juan thinks this terrible place has a few people remaining. Juan is in his sleeping bag outside in the cold. He won’t leave his refuge in the strong winds. He believes it would be terrible if his shelter fell. Now that the storm has ended, He says he’s never experienced that much constant wind. He sits by the river and drinks water. Juan did not drink enough water yesterday and needs to do so today. Juan is the only Alone competitor to not keep a fire. He fixes his shelter’s door and walls. Fasting saps his vigor.

Juan hammers his iced-over pot. He then cuts a hole and gets water. The river isn’t safe yet, but it will be soon. Once the river has frozen, he’ll walk across to get additional supplies. Juan is determined to win. he makes an ice-testing chisel. He’ll still hunt and trap while starving. Fortunately, he finds a nail and uses it to fix his axe to the ice chisel wood. Juan trims his toenails using a multitool. He leaves his shelter to add additional snow for insulation. His shelter is the warmest it’s been in a while, but he has no fire. Body heat keeps the sleeping bag dry. Everything is a battle, but he’s not afraid.