Get Ready for Tonight! All American Season 4 Episode 6 “Show Me A Good Time” 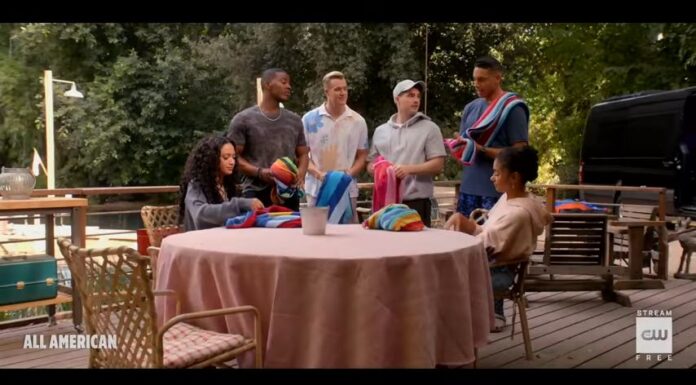 In the previous episode of All American Season 5, On All American Season 4 Episode 5, everyone, including Asher, decided on their football futures. They can now return to the personal drama that the show is best known for. Because football is such an important aspect of this series, it’s only natural that it dominated much of this episode. Asher was medically unfit, much to his dismay. (read recap below) What Will happen next?  Fans will be pleased to learn that there will be a new episode of All American airing tonight! There are no scheduled events in the next weeks, so fans can expect new episodes to air during the show’s regular programming. At www.tvacute.com, we have everything we know about All American Season 4 Episode 6 titled “Show Me A Good Time” from the promo to the spoilers. Spencer, Liv, and the rest of the gang are all set to have a good time.- It’s Senior Skip Day.

In the sixth episode, Called, “Show Me A Good Time” The gang reunites for one final celebration of their senior year of high school. However, things do not always go as planned. Jordan and Simone’s love is put to the test after their “new reality” threatens their future, according to the official episode synopsis. Meanwhile, Patience and Coop are having trouble getting their relationship on the same page. Billy, Grace, Laura, and Principal Carter visit South Crenshaw High and travel down memory lane. Things didn’t go so well the last time the gang stayed at the lakehouse. Secrets were revealed, resulting in the breakup of partnerships and the beginning of the end of friendships. Spencer doesn’t want that to happen again, Talk about a romantic couple Spencer and Liv. They’re going up to the lakehouse for the day in the hopes of spending some quality time together. After all, once college begins, that won’t be that simple.

All American Season 4.06 Synopsis: –  “OUT OF SYNC – Everyone is excited for Senior skip day, and Spencer (Daniel Ezra) plans a romantic getaway at the cabin for he and Olivia (Samantha Logan), but when the gang shows nothing goes as he had planned. Surprising news makes Jordan (Michael Evans Behling) and Simone (guest star Geffri Maya) realize they might not be as prepared for their new reality as they had hoped. Now that Patience (Chelsea Tavares) is back from tour, she and Coop (Bre-Z) can’t seem to get on the same page when it comes to their relationship. Meanwhile, Billy (Taye Diggs), Grace (Karimah Westbrook), Laura (Monet Mazur) and Principal Carter (guest star Lamon Archey) team up with an unlikely ally as they go on an adventure in the halls of South Crenshaw High to track down relics of the past.”

All American Season 4 Episode 6 will release on The CW on Monday, December 6 at 8 p.m. ET. You can also stream the show on live TV and VOD platforms such as YouTube TV, DirecTV, iTunes, Xfinity, Hulu LiveTV, Fubo TV, Spectrum, Google Play,  Microsoft Store, and Amazon Prime Video. Netflix users can also watch previous seasons. Season 4 will soon be available on Netflix, just like previous seasons of the drama, but not until after the season has aired on broadcast television. Season 4 of All American will premiere on Netflix in 2022.

Spencer must keep his pledge to Toledo State or he would be forced to sit out his freshman year. Patience has returned to the studio. Patience Coop’s headlining slot is offered by Layla. She has 48 hours to make a decision, according to Layla. Billy is hosting a combine for athletes who have been ignored by coaches in town for a conference at South Crenshaw. J.J. is still convinced that he is a quarterback. Spencer meets Coach Kenny, Corey’s old coaching buddy. Jen storms out of a NA meeting after Olivia shares. Olivia is asked to contact Nurse Joy about becoming a sponsor. Olivia told Coop that Patience had been given a spot on a tour by Layla. Asher tells J.J. that he needs to rehabilitate himself as a linebacker because he is tanking as a quarterback.

Spencer gives Chris and Jordan a run for their money as quarterbacks. Jen and Olivia have a common interest in football and ballet. Jen approaches Olivia and asks her to be her sponsor, but Olivia declines. Coaches want to meet Spencer and J.J., but Jordan isn’t interested. Amina seeks Coop’s counsel on how to deal with a buddy who is in difficulty. J.J. receives Asher’s Coastal California scholarship. Spencer is offered three scholarships, but he is more concerned about the Toledo State scenario. Spencer is also approached by Coach Kenny, who offers him a scholarship. If Hudson does not release Spencer from his scholarship, Billy threatens to damage Hudson’s reputation. Patience gets Coop’s permission to go on tour. Patience invites Coop to go on tour with her, but Coop feels obligated to Amina. Jordan is offered a walk-on spot by a coach. Olivia is encouraged by Spencer to assist Jen, and she does so. Billy is able to get Spencer out of Toledo State. J.J. receives an apology from Asher. Spencer will be attending the same school as Jordan and will be accompanied by Coach Kenny.