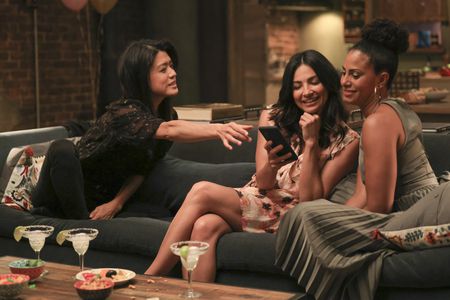 When we think of melodramatic moments, we think of A Million Little Things, which revolves around a group of Boston friends. Every episode ends on a cliffhanger. in the previous episode, Gary has a number of flashbacks that show what happened to Peter in the end. Maggie Bloom’s (Allison Miller) new employment gets off to a rocky start. Regina (Christina Moses) tries to work at other eateries in the area, but she is discouraged. As a result, Rome (Romany Malco) decides to take her on an adventure: they go indoor skydiving. Eddie has come late for his therapy appointment with Darcy. But the session goes well, and Eddie enjoys the fresh perspective. new therapist Russ pushes Eddie to obtain a job as the next step in his recovery. Continue reading about episode 3 by scrolling down the page. Now Let’s Find out what will happen in tonight’s episode? With www.tvacute.com, you can see the summary, photos, and promo for A Million Little Things Season 4 Show 3 named “Game Night,” which will help you better understand the episode.

The stormy relationship between Eddie (David Giuntoli) and Katherine (Grace Park) has been seen in every episode of A Million Little Things. An affair, a drug addiction, and a vehicle accident are just a few of the challenges the couple has faced. New Season brought big changes for Katherine and Eddie. Eddie moved out of their parent’s house and told Theo (Tristan Byon) of their divorce. Eddie is clearly unhappy with his predicament, despite his and Katherine’s good relations and their agreement on Theo’s custody. A bizarre call from the driver who caused his accident keeps him stuck in the past.  However, in this A Million Little Things Season 4, Episode 3 promo, Katherine looks to be enjoying her newfound freedom. Regina (Christina Moses), Dary (Floriana Lima), and Maggie (Allison Miller) throw Katherine a hilarious divorce party.

A Million Little Things Episode 403 Synopsis: When the girls decide to throw Katherine a celebratory divorce party, the guys get together to watch the hockey game and distract Eddie. Maggie is blindsided by some news, while Sophie is forced to stand her ground. Eddie helps Theo with a romantic gesture for a new crush and stumbles into someone from his past.

A Million Little Things Season 4 Episode 3 will release on Wednesday, October 6, 2021, at (10:00-11:00 p.m. EDT) on ABC. Following its broadcast debut, the show is available on streaming services like Hulu. The show is available on Apple TV, YouTube TV, and Microsoft TV. Other Options Amazon Prime Video (Not Now), Vudu, iTunes, and Google Play for video-on-demand.

Gary went to Christopher to enlist his help in pursuing Peter. On her first day on the job, Maggie doesn’t get off to the best start with some of the coworkers. Gina is having difficulty finding work. Eddie waits outside Halpert’s, the store, in the hopes of locating the woman who struck him. Rome contacts Katherine and requests that she spend time with Gina. When Katherine learns that Shanice will be present, she becomes anxious. Liam is still undecided about how he feels about the impending relocation. Detective Saunders approaches Liam and Gary while they are spending time together to discuss Peter. Eddie is matched with a therapist who is also in a wheelchair, thanks to Darcy.

Katherine is awestruck by Shanice’s presence, which she shares with her daughter. Theo and her daughter get along well and have a good time. In the flashbacks, Gary interrogates Peter and demands that he reveal what he did to the females. However, Christopher deviates from the script and specifically mentions Layla. He also removes Peter’s mask, allowing him to see both of them. At the house Darcy and Gary are looking at to see if they want to move in, Liam destroys a figurine. Katherine is finally herself and breaks the ice with Shanice. Gina’s date at the restaurant where she wasn’t employed has better cuisine than she expected. Eddie’s new therapist explains how he was actually hurt, and the two get along swimmingly. Maggie receives a call from a young child who informs her that his mother is a heavy drinker. Maggie wastes her time, pissing off Nick the weatherman even again so he may continue talking to the boy. Liam tells Gary the truth about shattering the figurine just as Darcy discovers it and warns him about the risks of being honest. Liam’s honesty is respected by the woman, and they are given the house. Shanice and Katherine discuss their divorces as well as other topics.

Maggie sees how wrong she was about Nick as he tells her that she was dismissive of what he does. When Gary gets in his car, Christopher appears in the back and says they need to chat. Christopher punches Peter in the back and urges Gary to return home. In the present, he tells Gary about how he snapped after Peter revealed the truth and asks what he should do next. Gary stated that they should avoid each other. Gina chooses to work at the restaurant. Eddie follows Russ’ advise and finds work, but it’s at Halpert’s, where he believes the woman who hit him works. When he notices a woman staring at him, he assumes it’s her and confronts her. She is, however, just a fan of his. Another woman witnesses the incident and may be the one who struck him.