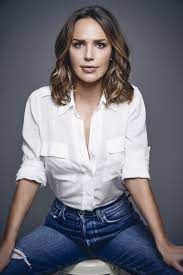 According to Deadline, The Vampire Diaries star Arielle Kebbel has joined 9-1-1 in the recurring role of LAFD firefighter Lucy Donato. Lucy works with the 118 on a rescue despite being a member of a rival firehouse (147). Lucy will make her first appearance in the spring premiere, which will air on Monday, March 21.

After being on sabbatical since December 6, 9-1-1 returns in its regular time slot of 8/7c (moving the Lone Star spinoff back to 9/8c with the first responder dramas showing back-to-back). Then, after his son stated that he wanted the perfect Christmas because he expected him to die next year, firefighter Eddie Diaz (Ryan Guzman) announced his plans to leave the 118. Guzman isn’t quitting the show, but we’ll have to wait and see where his career takes him next.

When 9-1-1 returns, Athena (Angela Bassett), Bobby (Peter Krause), and the 118 will “rush” to the rescue to save a family whose pick-up truck has been fitted with a pipe bomb that would detonate if the vehicle slows down below 55 miles per hour, according to Fox. Buck makes a rash relationship decision, and the 118 welcomes two new team members. Will Lucy, played by Kebbel, be one of them?