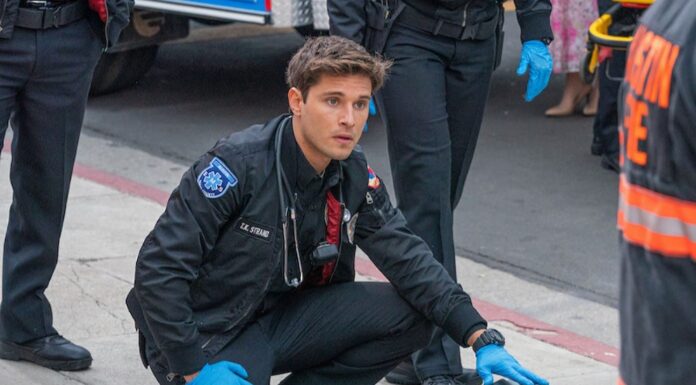 In the 911 Lone Star Season 3 Episode 8, Gwyn’s (Lisa Edelstein) son T.K. (Ronen Rubinstein) and ex-husband Owen (Rob Lowe) travel to New York for her funeral after she was hit by a bicycle. Instead, in a mid-flight accident, the plane loses an engine forces the first responders to jump in and save the woman. Along with this, we see heartbreaking flashbacks. Gwyn-centric hour gave us a new understanding of Lisa Edelstein‘s tragic character. read the recap below. After a wonderful episode, fans are looking forward to the next new episode. We (www.tvacute.com) are going to tell you everything we know thus far about the 911: Lone Star Season 3 Episode 9.

The next episode “The Bird” will be titled episode 9. this will be an episode about a bird. No! Tommy’s first date could be the element of the episode. He goes on her first date after Charles’ death. she is joined by Amaury Nolasco from Prison Break. After all, it will be a part of her self-discovery journey. It may take her some time to figure out what she wants from her future, but we’re looking forward to seeing how this narrative unfolds! Meanwhile, an unexpected military homecoming turns chaotic, the members of the 126 jump into action. Meanwhile, Owen is left in charge of a chatty pet. watch the exclusive promo.

911: Lone Star Episode 309 Synopsis: The members of the 126 spring into action when a surprise military homecoming erupts into chaos. Meanwhile, Owen is left responsible for taking care of a talkative pet, Paul faces a medical emergency and Tommy goes on her first date since Charles’ passing

Cable TV subscribers can watch ‘9-1-1: Lone Star’ season 3 episode 9 live on Fox at the aforementioned timeslot. You can watch it online with your valid cable provider login credentials after it airs on TV on Fox’s official website or the Fox Now app. The episodes are also shown on cable-free platforms like YouTube TV, FuboTV, and DirecTV, which don’t have a TV set. Subscribers to Hulu can watch the show soon after it airs on the original network. There are also VOD services like Apple TV, iTunes, and Amazon Prime Video that allow you to buy or rent episodes of TV shows.

Gwyn dies in tonight’s episode. She was busy crossing the street with the baby. A cyclist hit her. She died. But the baby was OK. A rider dialed 911. They sent him to check on Gwyn and Jonah. He knew she was gone, but the kid was fine, so the first concern is how Jonah will handle it. He was a tot. Not even a baby. Everyone thought Jonah wouldn’t remember because he was so young, but TK said there’s a chance he will because he remembers his baby mobile over his bed. So he wished for his brother to forget their mother’s death. Jonah was already traumatized by his mother’s death. He was going to reach for her and not realize she was gone. Jonah will undoubtedly wonder why the other kids have mommies and he doesn’t. Even if things go poorly for him, he can rebound. TK may not. TK is a junkie He told everyone he wasn’t going to the funeral so he could get back to work and be near medications on the paramedic cart. His father stopped him from doing something stupid. Owen took TK.

Carlos bought them tickets on the following flight out of Austin. The flight had only two tickets left. Carlos couldn’t get a ticket. And he vowed to join TK shortly. TK was unfazed. TK was so preoccupied with his own misery that he missed others. Instead, he remembers being hauled out of a drug den by his mother the last time he fell off the wagon. She also got him into LA rehab. It took everything she had, only Gwyn could be a force. Gwyn always knew what to do. She knew TK. She sang to him in Hebrew to quiet him. TK misses his mom. In a situation, he couldn’t turn to his mother for aid. But Owen was. Owen deterred TK from using. He got him on board. That’s because one of the engines blew. A window was smashed. Owen and TK saved a woman who was sucked into the window. The plane had to return to Austin, but TK and Owen treated Genevie’s injuries while they turned around.TK and Owen rescued her life and her arm. Heroes. It also helped TK forget about his mother and remember his strengths. His sobriety isn’t as simple as he believed. He once assured his mother he’d get clean just to bring back a lot of whiskey bottles.

He waited until she slept before discreetly grabbing the alcohol. Only his mother knew. She didn’t intervene. She just waited for him. When he returned to his seat, she asked him why he had sneaked away. Gwyn stated there was no one left to lie to. No one would believe him. And he needed aid. Affirming getting stuff for work when his father spotted him in the supply cart, TK subsequently confessed to acquiring fentanyl on the flight. He needed a high to forget his anguish. He told his father, and Owen didn’t judge him. Owen chose compassion. TK benefited from his father’s backing. They made it back to Austin. The whole aeroplane applauded because they were relieved nothing worse happened. But TK would miss the service. The boys couldn’t make it to New York for the burial because, according to Jewish tradition, Gwyn’s body must be interred twenty-four hours after her death. So they had to part in their own way.