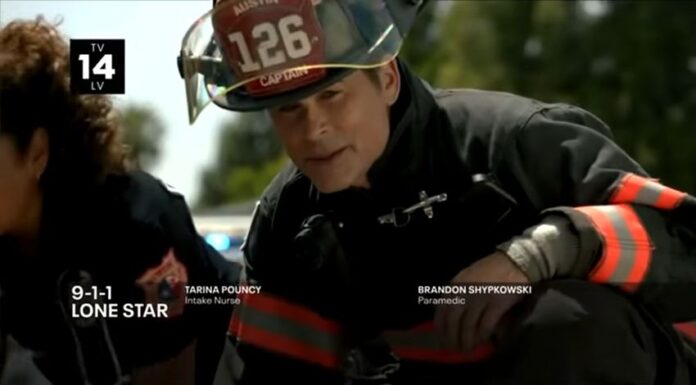 9-1-1: Lone Star season 3 episode 17 will release on May 9, 2022, on Fox.  Chad Lowe is in charge of yet another episode. He will direct the season’s penultimate episode.

In the latest episode of 9-1-1: Lone Star, Captain Owen Strand (Rob Lowe) departs Texas for Los Angeles to meet his dying father (Robert Pine). However, while there, he encounters another member of his family: Robert (Rob Lowe’s brother, Chad Lowe). So, in addition to speaking with his father about how he left him and gaining some closure, Owen also departs from California with Robert telling him not to be a stranger. read the recap below. After seeing what you saw tonight, it’s only natural to want to know when 9-1-1: Lone Star season 3 episode 17 will air. when the show will return and, more importantly, where things will go from here. We (www.tvacute.com) are going to tell you everything we know thus far about the 911: Lone Star Season 3 Episode 17

911 Lone Star Season 3 Episode 18 [Finale] Will Owen and Judd make it out of the wreckage alive?

As a director for Lone Star, Lowe is still a part of the show’s family. After directing two previous episodes (“Slow Burn” and Red Vs Blue ) of the first-responder drama, Lowe is now in charge of next week’s episode.

Chad Lowe talks with tvinsider about his first experience working with Rob onscreen and the next Lone Star episode he’ll be directing. Chad says there is a chance that his character could come back to the show. he says I’m doing the penultimate episode for this season and I think it’s when the show is at its best, which is there’s a little bit of everything: You’ve got some humor and we’ve got some personal relationship drama and an unexpected relationship that is very touching and also humorous to a degree. Then of course you’ve got some crazy rescues, some crazy situations people have found themselves in and needing to be rescued, and a great storyline with Judd [Jim Parrack] and Wyatt [Jackson Pace] where they start to bond a little more and Judd really decides to step up and really become the father that he perceives that Wyatt needs. And it has unexpected consequences that lead to an event that will then propel us into the season finale.

“Spring Cleaning” is the title of the next new episode. It will be used to set the stage for the climax, which will be significantly wider in terms of the plot. In episode 16 we learned about Owen and his family. And this time we’ll see a lot of the 126 and some romantic entanglements here. Tommy and Julius will have some fresh moments together in this episode. During these scenes, we’ll watch these two develop a stronger bond with one another. According to the synopsis, two team members will be involved in a hot romance, and we’ll watch them argue about whether or not they should keep their relationship a secret from others.

Case of the week; The 126 team will be kept extremely busy in this episode because they will have to rush against time to assist a distraught woman who is attempting to save her children. They’ll also have to race to get a man out of a trash compactor after he fell into it by accident.

911: Lone Star Episode 3.17 Synopsis: A man falls into a trash compactor; a frantic mum tries to rescue her kids in a runaway car; Tommy and Julius grow closer; two team members disagree on keeping their romance a secret.

Cable TV subscribers can watch ‘9-1-1: Lone Star’ season 3 episode 17 live on Fox at the aforementioned timeslot. You can watch it online with your valid cable provider login credentials after it airs on TV on Fox’s official website or the Fox Now app. The episodes are also shown on cable-free platforms like YouTube TV, FuboTV, and DirecTV, which don’t have a TV set. Subscribers to Hulu can watch the show soon after it airs on the original network. There are also VOD services like Apple TV, iTunes, and Amazon Prime Video that allow you to buy or rent episodes of TV shows.

When a wave comes crashing down, one of the brothers gets swept up and nearly drowns. Owen was the one who almost lost his little brother Tyler at the moment. Owen visits his father in Los Angeles for a few days. Wyatt phones Judd from jail, where he is serving time for tagging a billboard. Judd is irritated, claiming that this is not the Wyatt they are familiar with. Wyatt has been acting out for the past two months, according to Marlene, since his mother got engaged to Stanley. She requests that the Ryders keep a close eye on Wyatt. Owen travels to the location where his brother drowned. Judd invites Wyatt to spend time with him at the family ranch.

Owen goes to see his father, but there are a lot of other people in the room with him. He and his parents are in the hospital, and they are informed that his sibling has died. Owen tells someone in the waiting room about his father and how, when he was a teenager, his father stopped caring about him. Wyatt expresses his dissatisfaction with not having had the opportunity to spend time with and get to know Judd earlier. A rattlesnake bites Judd’s horse, knocking him from his mount. Judd breaks his leg. He tells Wyatt that the bone has broken through and that he needs to reset the ankle. When it’s finished, Judd passes out.

Owen contacts TK and tells him how much he loves him and how sorry he is for their long separation. Owen reflects on the day he and his mother went to New York City to be away from his father. Helen, Walter’s wife, doesn’t want Owen to upset him at first, but Robert begs her to let him speak. Owen apologizes to his father, and Walter responds by apologizing as well. He informs Owen that he has been keeping an eye on him. Jud is calm and content at the dinner table with Grace, Wyatt, and the baby. Judd and Wyatt to their home. Jud expresses gratitude to his own father for putting up with him. They are both grateful for their families. They’ve all formed a bond. Meanwhile, Owen goes to the beach for a surf once more.