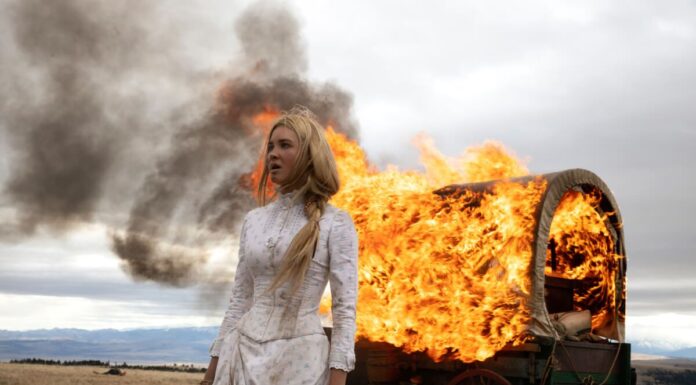 ‘1883’ tells the narrative of the Dutton family, who own and operate the largest ranch in the United States today. However, patriarch James Dutton and his family took a bloody and untrodden path to that empire years before. James and his family join a caravan commanded by Captain Shea Brennan in quest of a new home away from the poor streets of Texas in the prequel series. The series’ first two episodes aired simultaneously, providing viewers a vivid impression of life in the American West during the nineteenth century. let’s go into the events of ‘1883’ episodes 1 to understand everything important! Recap of Episodes 1 of 1883.

The first episode of the series, titled ‘1883,’ begins with a flashback that introduces Elsa Dutton as the story’s narrator.  Elsa Dutton is scurrying away from a burning wagon. There’s carnage, and she draws a gun on an Indian, who shoots her in the stomach with an arrow. Is it a dream or a reality? We have no idea. Shea Brennan is bidding his final goodbyes to his smallpox-stricken wife and daughter. He sets fire to his home and considers killing himself. Thomas, his friend, pretends not to notice and simply asks whether he’s ready to leave. It jolts Shae awake from his stupor. James Dutton is being pursued by a gang of cowboy criminals. Shae and Thomas keep an eye on the situation, speculating on how it may play out. However, they are unfamiliar with James Dutton. He’s not your typical farmer. Every single one of them is dealt with by James.

Thomas and Shae are blown away. James thanks them sarcastically for their assistance. Although John had the upper hand, he is sickened by such violence. He forgets to eat his lunch. While he plans for his family to join him, James arrives in town and has his horses and waggon observed. The town is alive with activity. When John’s money is taken, he kills two men to reclaim it. Shea and Thomas are planning a trip to Oregon with a caravan of strangers. At every level, the people are unprepared. They are unable to communicate in English. They are not permitted to carry firearms. Their oxen and luggage will not be able to make the journey. They require more soldiers, as well as some means of preparing these individuals for the arduous and perilous journey ahead. The other Duttons are on their way west aboard the train. Elsa has snuck into first class to witness the sunset, which is hidden behind the trees in her native state of Tennessee. Margaret brings her back to their overcrowded train car after a man flirts with her.

Margaret’s sister is annoyed by Elsa’s wit and smacks her numerous times, although her daughter claims Elsa deserved it. Shea meets a couple of cowboys who believe their stories are ridiculous but will join them regardless. Shea notices James across the room after the guys depart. They’d like to have a conversation with him. They are skeptical of James, but they hope that he will be willing to assist them with the foreigners. Elsa couldn’t help but grasp the train’s tail and gaze outside when the conductor said they’d arrived in Fort Worth. She sees her father and descends to run into his arms. Margaret is usually yelling at Elsa, but she softens a little when she’s in James’ arms. Claire informs James that his children are borderline feral. He expresses his condolences to her patient husband Henry. Elsa is warned by James that the town is hazardous and that she should not explore. The violence and language she witnesses in town fascinate Elsa. When they arrive at the hotel, James shows Margaret their room, which has a bathtub, which she much appreciates. A young woman tries to approach Shea, but he is uninterested. She thinks he doesn’t want to be alone with his memories, which is why he sits there waiting till he’s too weary to remember anything.

She sits on his knee and requests that he call her Helen so that she may give him another piece of his wife. Things go awry, and when he tries to whisper Helen into her ear, it doesn’t work, says je. Elsa later witnesses a saloon girl having sex in front of her window. Margaret and James take a bath while debating where they’ll live. A drunk enters Elsa and John’s room by accident a few moments later, but when he sees her, he tries to attack her. Elsa comes into her mother’s arms, covered in blood after James shoots him. Shea and Thomas are attempting to secure more livestock. Thomas is concerned that the more they wait, the more difficult their journey will be. Shea, on the other hand, wants to wait until he thinks they’re ready. James arranges for his horses and wagon to be liveried. Shea tries to educate the migrants about the perils of traveling, such as rattlesnakes, poison oak, and ivy. Before James arrives to assist, they have a humorous talk about shitters. They must begin screening all travelers for smallpox. They identify someone who has it, and Shea tells him he’ll die in three days and give it to everyone. Get out of town and die by the side of a river.